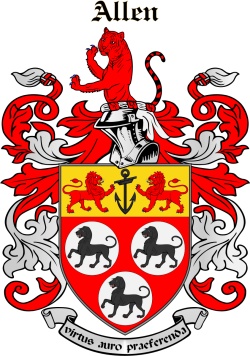 Design your own ALLEN Family Crest

This surname was originally a patronymic name, as it is derived from the personal name of an ancestor and as such would  mean 'the son of Alan', or 'Allen', or 'Aleyn'.

It is believed that the name first arrived in England with Alan or Alain Fergant one of the leading Breton chiefs who accompanied William the Conqueror to England in 1066. However, its roots lie further back in history than this, as it is  connected with the early 5th century Welsh and Breton saint, St Alan, as well as the 6th century Cornish saint after whom a Cornish parish, St Allen, is named.

The name 'Alun' appears in the ancient Welsh story, Culhwch ac Olwen, one of Wales's earliest extant prose texts, dating from at least the 11th or 12th centuries, and which is the earliest surviving Arthurian tales. As such therefore the name appears to have Celtic roots. The Welsh and Breton names may derive from the same roots as the Gaelic àlainn, and the Irish áluin(n), or álainin, meaning ‘bright,’ ‘fair', and 'handsome', although other theories suggest it is derived from the Gaelic word ailín, meaning 'little rock', or may instead derive from an old Welsh word, and indeed an ancient Celtic word, for deer (alan).

In Ireland, the forms Ó hAillin was seen in counties Offaly and Tipperary and anglicised to Allen and Hallion, while Hallinan is a variant of Allen in Co. Tipperary.

The popularity of this name in Scotland is mainly due to Walter fitz Allen (d.1177), a descent of Breton, the first Scottish royal steward and his son Alan (d.1204). This family were among the first to bear the surname in Scotland, the originators of the Steward dynasty.

In 1881, Allen was widespread across the UK with 55,708 occurrences and 2,499 residing in the southern county of Kent. An earlier bearer of the relative surname in the county of Kent was Johanne Aleyn in 1377. At that time, Allen family members worked as agricultural labourers, general labourers and farmers.

Hi my name is Megan Northup. My great grandfather on my maternal side of the family is William H Allen. He was born in Ingersoll Oxford Ontario Canada on May 5, 1873. He later moved to Seminole fl. I would like to find common ancestors so I can discover more about his earlier life.

i am gary lee allen .i was born in bridgeport ct 2/5/1950.my grandfather crawford allen born 1866 in virginia.his older brother was stanton allen.he helped founded the allen-bradley company in milwalkee wi.stanton allen died in 1916

Areas of Origin for ALLEN

Write an email address and click 'Invite' to share this page with more members of the ALLEN tribe.

Discover where the ALLEN Family members live around the world

Show off the ALLEN Family Crest…