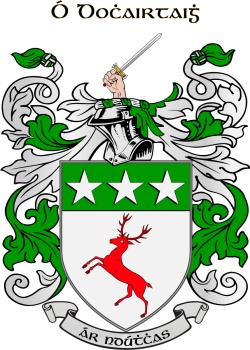 Design your own DOHERTY Family Crest

This sept were, by tradition, descended from Conall Gulban, son of Niall of the Nine Hostages (c. late 4th C.) Thus they are part of the tribal grouping known as Cineal Conaill, along with other septs such as the Ó Domhnaill (O'Donnell), Ó Gallchobhair (Gallagher), Ó Cannannáin (Cannon), Ó Baoighill (Boyle). Their ancient territory was in Tir Chonaill, 'the land of Conall', comprising much of Co Donegal. From earliest times they ruled in Cinel Enna and Ard Miodhair (Ardmire) in what became the Barony of Raphoe. However, in the early 14th century, with the decline of the Mac Lochlainn, they became rulers of Inishowen in the northern extremity of Donegal. They held this territory until the time of James 1st, and the Anglo-Scottish incursions of Protestant settlers.

It was their great chief Sir Cahir O Dogherty who led a rebellion against the new regime, and who was executed as a result. There is an Jacobean engraving showing the head of Sir Cary O Dochertie spiked on a gate, describing him as 'chief rebbel & Traytor'. After this act the clan lands were confiscated and handed to the Chichesters.

The name was already numerous in the 17th century. There is a legend which links the Dohertys, along with other 'northern' clans (Carey, Farrell, O'Toole, Quigley et. al.) to Co Tipperary, allegedly arriving there with the armies of Hugh O Neill, on his way down with the northern army to meet the Spanish allies at Kinsale in 1601. By way of historical fact, the ensuing rout of the combined Irish and Spanish by the English spelled disaster for the Gaelic way of life. These northeners, according to the legend, were involved in the 'faction fighting' with local, indigenous families in the early 19th century. None of these incomer names appear in the 1659 'Census' for Co Tipperary; however, several instances of Carey and Doherty occur in the 1664 Hearth Money Rolls for that county.

Matheson's Special Report on Surnames in Ireland (1909), which maps the distribution of surname frequency via births registered in 1890, shows that most Dohertys were born in counties Donegal, Derry and Mayo.

The name, often spelt as Docherty, is of early introduction into Scotland, where several adopted the Protestant faith of that land.

Cahir Ó Dochartaigh (d. 1608) proud and hostile to the invading minions of the neighbouring island's developing nation state, he sacked the city of (London)Derry. His castle, O'Doherty's Keep at Buncrana, was burned by the English, and he was executed (see above).

Kieran Doherty (1955-1981), born in Andersonstown, Belfast, was one of the Provisional IRA hungerstrikers who died in 1981. He lasted the longest of the 10 who died that summer, 73 days.

I am looking to continue my family line and cannot go back any further. My line of the Doherty starts with my great grandmother, Catherine Doherty who was born on 18 September 1887, in Belfast, Antrim, Ireland in 1887. Her father was William John D. Doherty, born Jan. 1863 and her mother Catherine K. Johnston, mostly known as Kate, born 23 August 1862. Williams father was also William John Doherty, born around 1829 and his wife was Ruth McClune born around 1828. I have not been able to trace my line back any further. I would love some help with finding the rest of my ancestors.

Looking for our relatives around Donegal. My Mom Ellen Doherty emigrated to the U.S.A along with one of her brothers Pat. Aunt Mary Doherty lived in Sligo. Anyone who can help us locate family, we thank you!!

Areas of Origin for DOHERTY

Write an email address and click 'Invite' to share this page with more members of the DOHERTY tribe.

Discover where the DOHERTY Family members live around the world

Show off the DOHERTY Family Crest…