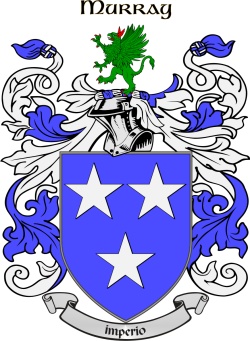 Design your own MURRAY Family Crest

Mac Muireadaigh - anglicised Murray and Murry, and earlier as MacMurray etc. and the same possible derivations as the above name.

Ó Muireadhaigh was the name of different septs. Woulfe, in 'Sloinnte Gaedheal is Gall' (1923), says the most powerful were in counties Roscommon (of the Uí Maine), Mayo, Westmeath and Cork. They were also found in Donegal and Cavan. The families are now widespread and dispersed. The chief of the Uí Maine sept appears in the 'Composition of Connacht' in 1585.

Mac Muireadhaigh is of Co Donegal, and of Co Down, according to MacLysaght ('Irish Families' series 1980s) anciently in that county. It has been suggested, too, that families of (Mac)Murray of east Ulster may come from a family of that name in Galloway, south-west Scotland; others in Ulster could be settlers from the Scottish Highland Clan Murray also.
Woulfe adds that there was an old native Breffney (Leitrim) family of this name, who are recorded early in the 16th century 'Composition Book of Connacht'.

The Registrar General's Report on Births in 1890 listed most in Dublin, Antrim, Cork, Down, Galway and Mayo.

Tell us about any famous MURRAY (or surname variant) you think we should add here. We will get our genealogists to check them out and add them to the list. Thanks!

Join the conversation with the MURRAY tribe

Hi i am looking for any relatives of francis edward murray from Ballyshannon donegal born in the 1930s. I have lost all contact with the family and would like to make contact. Thank

My 3x grandmother was Margaret Murray from County Down Ireland. She married James Adair on 9 December 1852 at Newtownards, County Down. Margaret's father was Michael Murray, a Carpenter from Mary St, Newtownards and James's father was William Adair, a Weaver from West St Newtownards. I have the family of James and Margaret Adair from Scotland but have nothing for Michael Murray and on James Adair death cert in 1872 his parents were William Adair and Jane or Jean McMoreland. I am sorry but this is all I have, Marie

My father was John Edmund Murray Sr. He was the second son of Frank Murray ( died in1916) from head injury due to horse accident in Central Park. He met wife Mary Doogan ( from Donegal county in 1907 in New York City. My grandmother was from family of 6 sisters who arrived alone to us in 1898 to work as maid for Dorothy Kilgallen. Grandmother passed in 1955 and is buried with her husband at Gates of Heaven in New York. I think I have relatives in Donegal County, Roscommon where grandfather Frank was born. Cavan and Kilsandra ( where his Ellis Island manifest said he was from at 21 in1907 . Same age as grandmother. My uncle Frank Murray worked as mathematician during the War. And my father worked for General Groves in Army Corp of Engineers. Aunt Virginia lived in New York City and two children Danny and Kathleen( Caitlin). Interested in finding relatives in Ireland. Have vacationed in Cavan and Donegal. Dublin too

Looking for Matthew Murray born 24 Oct 1868 parents Patrick Murray and Mary Carroll I believe they were from Galway which stated on Matthew Murray USA New York Naturalization for Petition. Maybe they came from Scotland. Michele 1914-384-3563

What about Matthew Murray, probably the most famous of the ilk! Born 1765 at Newcastle upon Tyne, son of Reynard and Margaret Murray, he died 20 February 1826 in Leeds. He built and worked the famous 'Round Foundry' in Holbeck, Leeds, where in 1812 he produced the world's first commercially successful steam locomotive for the Middleton Colliery Railway at Leeds.

William Baltus Murray from Dorchester County, SC My G-Grandmother was Eugenia Murray from Jedburg,SC This may be the earliest possible ancestor since they lived in the same area of SC. MURRAY - William Murry arrived Charleston from Belfast Ireland on 8 Feb 1768 on ship Betty Gregg. Settled on the Edisto River six miles from St. George, at the intersection of the Charleston - Augusta, GA stage coach road and the Walterboro Road (SC highway 15). For over a hundred years this community was known as "Murrays Crossroads" but was changed to "Grover". REF: Moorer, Connor, Murray book by Monroe Black (1997. From the Orangeburgh German-Swiss Society webpage

Ancestor Robert Murray (of Scottish descent before 1746 defeat of Jacobite rebellion) enlisted for British Navy in Cork in 1806. Hoping for any suggestions as to how his family history prior to 1806 can be found in Ireland.

Hello all, my name is Paul Murray and I'm from Charleston, South Carolina. I'm very proud of my Irish heritage. Some of my ancestors came from Dublin, Ireland.

I am looking for my 4th great grandfather’s mother and father. He was born in 1790 Wicklow Ireland. His wife was Bridget Kelly. Both died in Ontario Canada. Does anyone have fiat passage information when the left and where the landed,(USA), or Canada. Thank you Ann Katherine Murray

Note to bobburns message: Tracey is a family known to my Murrays of lower Minnesota, Mapleton area. I found the two names on a family tree website for the Traceys. Good luck.

hi I'm Kevin Murray trying to trace relatives of my dad Michael joseph Murray born in 29/06/1904 in Letterkenny ,who went on to marry Sarah McFadden nee McBride,on the 21st April 1936 in Letterkenny is mother was Lizzie,so any help would be grateful,i can go back to 1864 with my mother side but I am drawing a blank with my dad side

Looking for info on a Reynard Murray, born in 1750 in Ireland, traveled to England and had a daughter named Margaret Murray born in Newcastle Upon Tyne Northumberland England in 1780, her mother was unknown, Reynard was her father... this is all info I have on Reynard, my fiance is a living descendant of Reynard and I would love to surprise him with more info.. thanks if anyone can help..

hello,the murrays im looking for originate from galway and the west of ireland many left during the famine 1846,they married into a family called nestor,there was a patrick and jane murray,who would have been in there 40's when they left ireland and landed in new york,there are also murrays in canada and australia,two brothers timothy and robert went to australia with their famolies in the 1920's,any information at all would be appreciated,they were all roman catholics.

Catherine Murray (b: Dec 4, 1831), along with Mary Murray (b: March 1827) and Daniel Murray (B: 1816). The siblings came to America in 1855. from Belfast to Wisconsin. With the age differences I would guess there are others. Catherine married Richard Fitzgerald from Buffalo County Wisconsin. Mary married Daniel O'Hearn from Waupan, Wisconsin. I have not found documents that name their parents or give info for more clues. Would like to connect them to Ireland.

I just found family on father's 'Persons' side that go all the way back to Dal Riata's 188th King, wow, i couldnt be more astounded and awed, i love the history of all of my family, its like meeting them all in one room of heaven! :D

I am hoping to get going in the right direction. I am a 3rd generation American, but was adopted. I know my mothers maiden is Woodard. When I tried to look this up it keeps referring back to family name Murray. Any help would be wonderful.

Just wanting to know more about my biological fathers family. His name is John warren Murray. His mother is Sheila Murray father Al Murray. He has two sisters, Rachel and Jennifer. I would like to know so when my daughter Alex has to do her family geneoligy at school I can tell her more than just my bio dads name, his parents and siblings. Please let me know.

I am researching brothers my ancestor John Murray 1737-1790 and Francis Murray 1731-1816 out of Ireland probably Belfast and into Colonial America. John and Francis had a sister Mary Murray Tracey and a niece named NancyAgnes Martin widow of Daniel Martin. John, Francis, and presumably Mary were born in Ireland. Francis died in Newton, Bucks County, PA, and John died in Elkton, Cecil County, MD. John was a merchant and during the American Revolution was a privateer.

Areas of Origin for MURRAY

Write an email address and click 'Invite' to share this page with more members of the MURRAY tribe.

Discover where the MURRAY Family members live around the world

Show off the MURRAY Family Crest…